Many birth defects and injuries can be attributed to medical negligence. Doctors may fail to act quickly or properly in dire situations, and a child will remain affected for the rest of his or her life. Other birth defects, however, occur in the womb, and are in no way attributed to medical malpractice or negligence. These defects normally have internal and external factors that play into their development. Cleft lips and cleft palates are one of these birth defects. They do not occur because of negligent medical providers, but because of varying internal and external players, some of which, we do have control over. 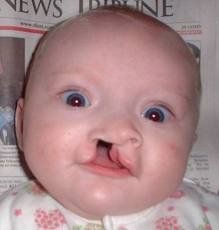 An infant’s face and skull form within the womb during the first trimester. Normally, the tissues that make up the hard palate (roof of the mouth) and the lip fuse together. When they do not, a hole or opening forms. This hole/opening is known as a cleft.

Internally, genetics can play a big part in the development of a cleft lip or cleft palate. These genes can cause an isolated incidence of cleft, or they could be part of another syndrome whose symptoms or side effects include clefts. Often, a child inherits genes that increase the likelihood of developing a cleft, and then environmental factors trigger it’s formation.

Externally, a mother’s environment can determine whether or not a cleft will form. Fetuses exposed to alcohol, illicit drugs, cigarette smoke, and certain infections, are more likely to develop a cleft lip or cleft palate. Recently, it has also been revealed that the anti-epileptic drug Topamax, used to treat migraines as well as seizures associated with epilepsy, can increase the risk of cleft development when taken during pregnancy.

If your child has suffered from a birth injury or birth defect, you probably have a list of questions about your rights and the rights of your child, especially if that birth defect is a cleft lip or cleft palate that you believe is associated with your use of Topamax during pregnancy. Contact the Mininno Law Office for a free case evaluation, or call for a free consultation at (856) 833-0600 in New Jersey or (215) 567-2380 in Philadelphia.