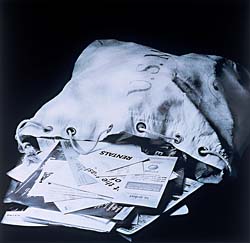 On June 11, 2011 Juan David Hernandez, 28, who is a Colombian citizen and a resident of Florida, was arrested in Vancouver for obstruction of justice after he gave a false name when he was pulled over for an illegal turn by a police officer. According to Vancouver Police Det. Rick Stewart, “When they looked inside the vehicle’s front seat, they saw bags and bags of mail.” The bags were full of letters from all over the world containing checks for $30. After an investigation, they discovered that Hernandez was guilty of elder abuse, scamming senior citizens by sending them letters asking for a small payment in order to be in the running to win a big cash prize.

The mail was being sent to four Vancouver area mailboxes and was bringing in about 200 letters a day. Hernandez was specifically targeting senior citizens. The over 5,000 victims were between the ages of 68 and 94, according to the police. According to Detective Stewart, this was the largest telemarketing or mail scam they have seen in the last seven years. Hernandez plead guilty to fraud over $5,000 and was sentenced to six months in jail.

Warning the Elderly About Mail Scams

These mail scam elder abuse cases happen more often then you would think and we want to remind the elderly to be more careful when sending information or money to mail out offers. Criminals are taking advantage of a very trusting, vulnerable part of our population. According to Stewart:

“These people are targeting our elderly. At best, I would say this is a systematic targeting of our elderly. At worst, it’s elder abuse… Once an elderly person answers one of these letters, they end up on every hit list going around the world. They’re not victimized once; they’re victimized several times.”

If your loved one is currently being taken advantage of financially, or they are a resident of a nursing home or care facility and you are worried that the care they are receiving is negligent, abusive, or inadequate, contact the Mininno Law Office for a free case evaluation. You may also call for a free consultation at (856) 833-0600 in New Jersey, or (215) 567-2380 in Philadelphia.