Putting your loved one into a nursing home is a scary time because of all of the unknown worries. You are giving up control of the care of this vulnerable person to a group of strangers. We give advice for picking facilities and tell stories of nursing home abuse and neglect that we hope you learn from, but sometimes even doing everything right when picking a facility is not enough. 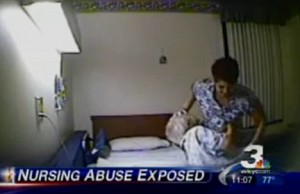 Prentiss Center for Skilled Nursing Care, a MetroHealth nursing home in Cleveland, has been in the news recently because Steve Piskor captured the abuse of his 78 year old mother, Esther, on a hidden camera. The videos, which have led to both criminal charges and regulatory investigations, show nurse’s aides Virgen Caraballo and Giselle Nelson striking the patient’s face, violently throwing her into her bed and wheelchair, pushing her face into the wall, and repeatedly spraying her face with an unknown liquid that was later identified as perfume.

The facility has apologized for the nursing home abuse and hired an outside firm to investigate what has happened. The investigation will also look into the home’s policies and procedures to make sure this does not happen again. The facility has fired both Caraballo and Nelson and suspended nurse’s aide Jamiescha Whitlow for five days for failing to report patient abuse she witnessed.

The scary part about this story is that both of these employees have been praised for their work performance in the past, showing that abuse can come from any of these caregivers. It was noted that Caraballo received high marks on her past evaluations. In February 2010, supervisors said that she “maintains a safe environment for her residents” and that she is “very conscientious with the care she gives.” A few months ago, she was called “attentive to residents needs and very thorough.” The other nurse’s aid in the video, seen spraying the patient with perfume, was recently named the nurse’s aid of the year, an award that is based on nominations from residents, staff and families.

Since this story came out, a MetroHealth employee has said that she reported potential nursing home abuse similar to this story but the facility’s administrators repeatedly ignored her complaints.

“Many a time I’ve reported different things that didn’t look right – scratches, bruises – and it’s pretty much like ‘I don’t want to hear it.’ My heart breaks to see that happening like that …Everything I’ve seen is uncalled for.”

Susan Christopher, a spokeswoman for Metrohealth, said the hospital has no record of any employee coming forward with these complaints. She told reporters, “We encourage our employees to report any inappropriate behavior and we will continue to do so … we have steps in place to ensure patients are safe.”

If your loved one is currently a resident of a nursing home or care facility, we encourage you to visit frequently and be very observant of any scratches, bruises or anything that does not look right. If you are worried that the care they are receiving is negligent, abusive, or inadequate, contact the Mininno Law Office for a free case evaluation. You may also call for a free consultation at (856) 833-0600 in New Jersey, or (215) 567-2380 in Philadelphia.