In 2003, Texas government passed tort reform legislation regarding medical malpractice lawsuits within the state. The new legislation capped medical malpractice payouts at $250,000 per provider, with a maximum of $750,000 all together. It also stated that in order for emergency room physicians to be responsible for civil damages, they would have to act with “willful and wanton” negligence.
In other words, they have to purposefully and knowingly put their patients’ lives in danger.

You’d have to be a Nazi death camp guard to meet this standard.

The liability caps and impossible standards are making victims of medical malpractice weary as they find that, in Texas, they simply do not have a case. 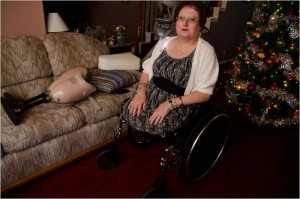 Connie Spears, a 54 year-old woman with a history of blood clots, went the the emergency room at the Christus Santa Rosa Hospital in San Antonio, Texas, complaining of excrutiating leg pain. She was discharged with “bilateral leg pain” and told to follow up with her primary care physician.
Three days later, Connie’s legs were purple. An ambulance took her to another area hospital where doctors determined that a filter that had been installed in her heart years before was severely clotted, which led to tissue death in her legs, as well as kidney failure. Weeks later, Connie awoke to find that both of her legs had been amputated in order to save her life.

Now, she can’t find an attorney who will take her case, because in Texas, she doesn’t have one. Clear negligence exists, yet attorneys no longer have confidence in their judicial system due to the new standards set forth by tort reform. They also argue that this “willful and wanton” standard for medical malpractice allows for a serious decline in the standard of care provided to patients in Texas, and could allow Texas ER’s to become the most dangerous in the country.

Tort Reform has significantly and severely damaged a medical malpractice victim’s chance at justice in Texas. Connie Spears will live the rest of her life without her legs due to a careless misdiagnosis, yet because of the standards Texas tort reform has put forward, she may never be able to gain the compensation she needs and is entitled to.

Medical malpractice affects many patients in the US, and victims should know that when doctors act negligently, they are liable for damages. If you or a loved one have suffered at the hands of a negligent and/or careless doctor, contact the Mininno Law Office for a free case evaluation or call for a free consultation at (856) 833-0600 in New Jersey, or (215) 567-2380 in Philadelphia.
Let our team earn you the full and fair compensation that you need and deserve.