Lois Pierce was spending time at Fort Sanders Sevier Medical Center in Tennessee. Bed sore attorneys say that she was transferred from that center on April 7th, 2008 when she began developing small pressure sores. The woman was moved to Pigeon Forge Care and Rehab in hopes of treating the minor bed sores. Only one month later, Lois Pierce tragically passed away after she was removed from there and taken to an emergency room to treat massive bed sores which became infected and had reached stage four. The appellate court’s summary of the case stated “on May 7, 2008, she died when her organs failed as a result of the infections.” 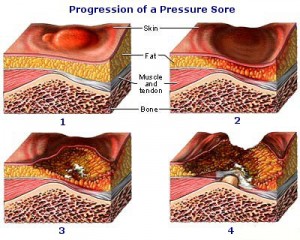 Pierce’s son, David Blackmon, attempted to file a complaint in Sevier County Circuit Court but defense attorneys claimed that the action had to go through arbitration due to forms that Blackmon signed while his mother was at the nursing home. The appellate court affirmed the lower court’s ruling in favor of the woman’s son. Judge Rex Ogle, the lower court judge, found that the center failed to provide Blackmon with copies of the forms that he signed, a major mistake according to bed sore attorneys. The Judge noted “it troubles the court that anybody who requires someone to sign legal documents affecting the rights of patients would not give those people copies, executed copies. That makes no sense to me.” Lawyers say that the Judge continued by stating “the execution of the agreement, the way it was handled, it was very shoddy. And I think that quite candidly is unconscionable, that it does shock the conscience of this court by how this entire agreement was handled they should not be enforced.”

If your loved one has recently suffered from a bed sore, you may have questions for our professionals regarding your legal rights. If you suspect that neglect or mistreatment played a factor in the development of a bed sore, Please contact the Mininno Law Office for a free case evaluation. You may also call for a free consultation in New Jersey at (856) 833-0600, or in Philadelphia at (215) 567-2380.