It is always heartbreaking to hear a story about an elderly adult being neglected and abused by a family member. As elder abuse lawyers, we want to remind you to look out for the signs and not to be afraid to intervene if a family member is not providing enough care for an elderly relative. The family of an 83-year-old woman is facing serious charges of elder abuse after their neglect landed the bedridden woman in the hospital.

Mary Jane Baker was admitted to the Peninsula Regional Medical Center in January 2010 where she reportedly weighed only 60 pounds and was “malnourished, neglected, and suffered from multiple sores from her shoulders down to her feet.” She stayed in the hospital for a week before being moved to a nursing home, only to return to the hospital on March 3, 2010 where she died six days later. 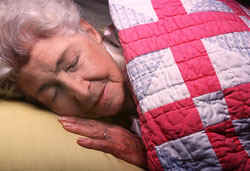 Baker’s 63-year-old daughter, Sherry Lynn Mundy, has been convicted of severe neglect and sentenced to three years in prison. Judge Kathleen Beckstead suspended all but a year and a day of the Mundy’s sentence, which she will serve in state prison. According to prosecutor Joel Todd, “The fact that she imposed Division of Corrections time as opposed to local time should be a big deterrent to anyone else who might be thinking about a neglecting a vulnerable adult.” Mundy is also required to serve three years of supervised probation and is banned from being a caregiver for a vulnerable adult or anyone older than 65 years old.

Baker’s other daughter, 56-year-old Amy Jane Davis, was convicted of similar charges and sentenced to five years in prison with all but 30 days suspended. Davis only lived in the home with the victim for 6 months, “That certainly mitigated the amount of time Ms. Davis was going to get,” Todd said. Baker’s husband, 85-year-old George Wilbur Baker, and granddaughter, 27-year-old Michelle Lynn Hundley, have also been charged and are still awaiting their sentencing hearings.