As elder abuse lawyers, we know having a parent or loved one with Alzheimer’s or dementia has a long list of day-to-day challenges. For those who have a parent that has tendencies to wander from the home there is also an added element of constant fear. According to the Alzheimer’s Association, there are nearly 6 million people with Alzheimer’s in this country and studies have shown that 60 percent of those who suffer from the disease will wander off and become lost. Sadly, about half of those who do get lost and are not found within 24 hours might die. Dr. Andrew Carle, director of the senior housing administration at George Mason University’s College of Health and Human Services said, “They might be living in their home but they’re confused… They go for a walk and they can get lost for days.” The problem with Alzheimer’s suffers wandering off is “they don’t think they’re lost. They may actually hide. Paranoia is a manifestation of the disease. So search and rescue is hard to do,” says Carle. 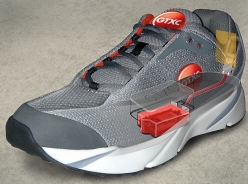 Carle has served as an advisor on a project by the GTX Corporation to develop location-tracking shoes with a GPS in the heel. They were developing the shoe for marathon runners and children when Carle “pointed out why this was an ideal technology for people with dementia who wander.” There has been GPS pocket devices, wristbands, and bracelets and pendants with names and contact numbers on the market but these were easily lost or removed. The wearer is much less likely to remove their shoes. The shoe’s technology will allow a family member to set a perimeter such as the house and yard that the wearer can move around freely, “But if he breaks the fence, Google maps pops up on my computer or my phone to show me where he is,” Carle explained. When it comes out on the market, the shoe is going to cost about $300 with a $30 to $40 monthly subscription fee.

If your loved one is currently a resident of a nursing home or care facility, we encourage you to visit frequently and be very observant of any scratches, bruises, or anything that does not look right. If you are worried that the care they are receiving is negligent, abusive, or inadequate and would like to speak to one of our elder abuse lawyers, contact the Mininno Law Office for a free case evaluation. You may also call for a free consultation at (856) 833-0600 in New Jersey, or (215) 567-2380 in Philadelphia.