You may have heard or read the term “tort reform” recently, regarding litigation and verdicts awarded to victims of nursing home abuse, medical malpractice and negligence, or defective products.
If you were unclear as to what it meant, read on. 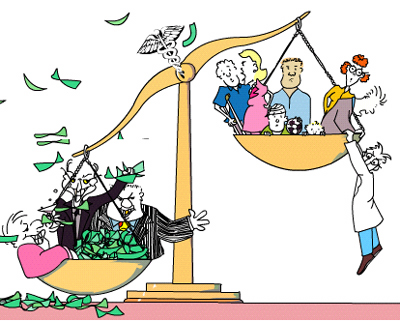 What is Tort Reform?

Tort reform is an effort to take away the average consumer’s rights to fair compensation for substantial losses brought on by negligent manufacturers, doctors, nurses, or caregivers. Tort reform allows big businesses and other power players to get away with negligence, fraud, or other acts of harm.
These corporations, insurance companies, and their political counterparts promote an aggressive campaign of propaganda, boasting the economic benefits of tort reform, so that companies will not have to rightly compensate the people they injure. It pushes for caps on recoveries that judges and juries can award in litigation.

Who is in Favor of Tort Reform?

Tort reform advocates are a coalition of insurance companies, HMO groups, pharmaceutical companies, big businesses, and other interests who want to protect companies from liability when they harm their own consumers.

Who is NOT in Favor of Tort Reform?

Civil rights advocates, consumer advocate groups, plaintiffs attorneys, labor groups, state prosecutors, legal scholars, and more. Some of these entities include The Public Citizen, The Committee for Justice for All, Mothers Against Drunk Drivers (MADD), The Center for Justice and Democracy, and The American Association for Justice.

Who is Harmed by Tort Reform?

Consumers are the victims of tort reform. Tort reform takes away your right to a fair case, in which an impartial judge or jury looks at the facts of your case to determine liability, if you are eligible for compensation, and what that compensation should be.
We trust juries every day to determine if people are guilty of capital crimes and other serious offenses, but tort reformists claim that we shouldn’t we be able to count on them to determine fair compensation for someone whose life has been negatively affected by the negligence of another.

NJ and PA Attorneys at the Mininno Law Office

The Attorneys at the Mininno Law Office are dedicated to protecting the rights of consumers. If you have been affected by the negligence of a manufacturer, a doctor, a nurse, or a caregiver at a nursing home, contact the Mininno Law Office for a free case evaluation.
We are here to work for you, and earn you the compensation that you DESERVE!