Falls are one of the most common injuries that occur in nursing homes and long term care facilities, but they are also very preventable. The Augustana Health Care Center in Hastings, Minnesota is being cited for nursing home neglect after a man fell from his wheelchair in March and was not properly cared for after the fall. The state is saying that the facility did not appropriately monitor the man who had suffered a head injury.

Man Dies From Large Hematoma After Fall From Wheelchair 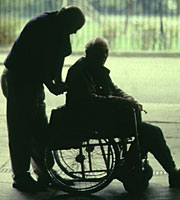 According to a report issued by the Minnesota Department of Health Facility Complaints Office, the man fell from his wheelchair on March 8th and suffered a “large hematoma, approximately four centimeters by three centimeters, on his left forehead.” He had bleeding that was putting pressure on his brain and depriving him of oxygen. The patient was examined 30 minutes after the fall, but no vital signs or neurological tests were done for at least three hours. Four hours after the fall, he was unresponsive and his vital signs were not stable. The nursing home transferred him to a hospital where he died two days later on March 10th. The death certificate states the cause of death as a “massive intracranial hemorrhage.”

The report says the neglect occurred when “staff did not assess, monitor and treat“ the resident in a timely manner “when signs and symptoms indicated a head injury.” The report also said that the nursing home did not follow “standards of practice for ongoing post fall examinations/assessments, including vital signs and neurological assessments.”

After the resident’s death, the Augustana Health Care Center has taken several steps towards increasing care including revising policies when handling falls and head injuries and retraining nurses and staff members. Disciplinary action has been taken against the nurse who was assigned to care for the man who died.

The facility did not provide proper care to this man after he fell from his wheelchair. Unfortunately, according to the man’s primary care doctor, even if correct treatment had been given immediately after the fall, the man would have still died due to his complex medical issues. This shows how important prevention of nursing home neglect is when caring for the elderly.