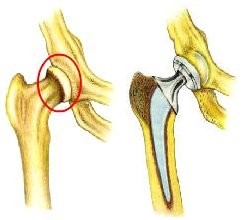 Whenever there is rubbing between two surfaces, there will always be wear and tear. All hip implants will have some wear and tear between the implant and the bone. During surgery, a surgeon will cut out the old hip joint and glue in a new hip joint (implant). These implants will have both a “ball,” which is at the head of the femur, and a “cup,” which is the joint/hip socket. These pieces will rub together and over time, break down.

However, although all of the implants do shed, most implant patients would not need a new implant for about 10 or 15 years. The wear rate for a metal-on-polyethylene implant is about 00.10 milileters each year. This hip implant wear rate was deemed to be medically insufficient.
The recalled DePuy hip implant system uses metal-on-metal bearings consisting of Cobalt and Chromium. DePuy advertised this system as producing less wear debris.

Unfortunately, the medical research which tracked DePuy hip implant patients showed that these recalled DePuy ASR hip replacement systems had a greater rate of wear and tear, and were actually producing MORE wear debris. The research showed that there was a significant volume of microscopic metal particles which were being released into the patient’s bloodstream. These cobalt and chromium submicroscopic particles, accompanied with the rate at which they are being distributed within the body, can have seriously adverse effects on patients.

In addition, since the wear and tear rate of the DePuy ASR hip replacement systems seems to be greater than that of traditional hip implants, they are not lasting longer than traditional hip implants and surgery is needed much sooner. As a result, DePuy Orthopaedics, following an exposé published in the New York Times, finally issued a voluntary recall of these products.

Although all hip implants (and all body part implants for that matter) are subject to wear and tear, the DePuy hip implant has a greater rate of wear and tear than it’s competitiors, and the metallic materials which are being shed during this wear and tear are hazardous to a patient’s health.
If you are the recipient of a DePuy ASR hip implant, contact the Mininno Law Office for a free case evaluation or call for a free consultation at (856) 833-0600 in New Jersey, or (215) 567-2380 in Philadelphia.

Our product liability attorneys will be able to offer you the right advice and steer you in the right direction concerting your next move. Let the team at the Mininno Law Office 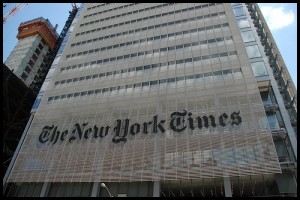 Give credit to the New York Times for being the first to warn patients and doctors about the potential defects that eventually led to the Depuy hip implant recall.

In March of 2010, The New York Times was the first to break the story about these potentially defective products which could cause serious injury to patients. Although The New York Times’ data was essentially indisputable, DePuy issued strong denials and defended it’s hip implant’s track record.
DePuy fought back, saying that their ASR XL Acetabular System was just as safe as other hip implant systems distributed by other manufacturers. Ironically, as The New York Times reported, DePuy was actually attempting a “silent recall” by phasing out the sales of these defective implants, claiming it was for “business reasons,” and denying it had anything to do with safety.

Not surprisingly, DePuy’s strenuous defense of it’s hip implants turned out to be false. In fact, a few months later, in August of 2010, the FDA sent a warning letter to DePuy regarding other questionable marketing techniques. Within days, DePuy issued a voluntary recall of it’s ASR hip implant system, and finally conceded that the failure rate for this hip implant was greater than that of it’s competitors.
DePuy Orthopaedics President, David Floyd, then belatedly expressed “regret that this recall will be concerning for patients, their family memebers, and surgeons.”

Interestingly, there was no mention of The New York Times article which identified the precise problems with DePuy’s hip implants just a few months earlier.
Let’s give credit to New York Times investigative journalists, Barry Meier and Andrew W. Lehren, for first breaking the story. Without their reporting, DePuy would have been successful in it’s “silent recall” of these potentially defective hip implants, and patients would have never known about the health risk associated with these products.

If you or a loved one recently have recently undergone a hip replacement surgery, you may be the recipient of a defective DePuy hip implant. To be sure, you should contact your orthopaedic surgeon, or the hospital where the procedure took place.
If you are, in fact, a recipient, you will need a DePuy Hip Implant Recall attorney. Contact the Mininno Law Office for a free case evaluation. You may also call for a free consultation at (856) 833-0600 in New Jersey, and (215) 567-2380 in Philadelphia.

We are here to help you earn the compensation you deserve.

Recently, DePuy Orthopaedics posted a patient handout for hip implant claims on its web site. This implant recall handout is supposed to provide patients with detailed information about the full amount of compensation that patients would be entitled to receive if their surgeon implanted a defective DePuy hip implant.
That handout states as follows (click on the image to enlarge): 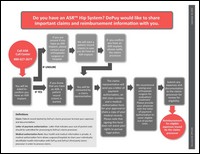 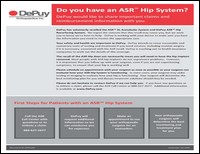 In this country, our civil justice system deals with what happens when a corporation breaks the rules of society that are designed to keep citizens safe. Here, DePuy Orthopaedics has admittedly broken our civil rules of society by selling, for a profit, a defective product; more specifically, a defective hip implant. DePuy sold this product in order to earn a profit for its parent company, Johnson & Johnson, a publicly-traded company whose reported annual revenues of the 2008 fiscal year were $63.75 BILLION DOLLARS.

What is fair compensation for a person who needs to endure pain, disability, loss of income, hospitalization, and the many risks associated with a second surgery when a $63.75 billion corporation sells, for profit, a defective hip implant?

Should a patient allow a DePuy claims adjuster, hired and paid by DePuy, decide what is their fair compensation? Would this DePuy employer be more concerned about a patient’s health and welfare, or the health and welfare of his/her employer Corporation?

Ultimately, any person with a defective implant should consider presenting this claim to a jury of their peers to decide what would be fair compensation. DePuy’s “claim process” would shield the company from a jury of his or her peers to determine what this 63.75 billion dollar corporation should pay as fair compensation for its defective product – the ASR XL Hip Implant System.

We are strongly encouraging anyone with a potentially defective hip implant to contact the Mininno Law Office for a free case evaluation or call for a free consultation at 856-833-0600 in New Jersey, or 215-567-2380 in Philadelphia.
We’ll inform you of all, not just some, of your rights.