Family Practice News, an independent, online newspaper that provides timely and relevant news about clinical developments in the field of family medicine, recently reported on a study that showed that specific and firm protocol regarding shoulder dystocia and other birthing hazards could significantly reduce the instances of birth injury. 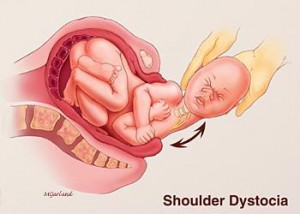 The protocol system, called Code-D, reduced the occurences of infant brachial plexus injury (Erb’s Palsy) caused by shoulder dystocia (when a baby’s shoulder gets stuck behind the mother’s pelvic bone by 26%, according to study reports presented at the Society for Maternal-Fetal Medicine annual meeting.

The study assessed nearly 12,000 vaginal deliveries that utilized the Code-D delivery standards, which include mobilization of experienced staff, a hands-off pause for assessment, and additional varied maneuvers.

Staff at the Jamiaca (NY) Hospital Medical Center were trained with the protocol, which involved practicing on manikins. Staff were trained to utilize the hands-off pause a “breather;” a short pause to take a deep breath, assess the situation, and quickly move on appropriately.

Dr. Inglis, of Jamaica Hospital Medical Center, says that Should Dystocia and brachial plexus injury are on the rise in recent years because of maternal obesity and diabetes. Hopefully, this system that has shown great success for Jamaica Hospital will be implemented in hospitals nationwide and continue to reduce injury in newborns.

If your child received an injury to his or her brachial plexus during child birth, it’s possible they are victims of shoulder dystocia and a negligent obstetrician. Contact the Mininno Law Office if you have any questions regarding the condition of your child and/or your legal rights. You may also call at (856) 833-0600 in New Jersey, or (215) 567-2380 in Philadelphia.

Each day a defective product manufacturer quietly pays off another victim in a secret settlement that no one will ever learn about. These Court approved secrecy agreements hide vital information concerning public health and safety. How? Companies manufacturing defective products will only pay for the harms they cause if the victims agree to secrecy. Why do negligent product manufacturers insist on secrecy? Because makers of unsafe products such as medicines, airplanes, baby cribs, or car tires, realize that consumers would not buy these products if the products dangerous aspects were known to consumers. Below are just a few examples of the harm that secret product liability settlements cause.

In 1996, a mother gave her 7 year old son the recommended dosage of an over-the-counter children’s medicine to treat an ear infection. Hours later the boy suffered a hemorrhagic stroke (a stroke that involves bleeding on and outside of the brain) and fell into a permanent coma. Three years of life support and failed rehabilitation attempts followed before the boy died. Later, doctors concluded that the boy’s stroke was caused by an ingredient in the medicine called phenylopropanolamine. The unsafe ingredient has since been banned by the FDA and removed from the number of over-the-counter medicines in which it was found. But before this little boy took the medicine, similar lawsuits had been filed against the negligent drug manufacturer. All of these claims should have been in the public record; however each of these defective product suits was quietly and secretly settled. Had information about the unsafe drug been made public, that boy would be a young man today.

In 2003, three Texas businessmen died when their Cessna Caravan airplane, being flown by a professional pilot, crashed due to a defective deicing mechanism. This mechanism, when working properly, removes built up ice from the wings and exterior of the plane. Ice on the wings and the airframe disrupt airflow, and can seriously affect flight, as it did in this case. During this product liability lawsuit, the plaintiff’s lawyers found concealed evidence that proved that Cessna knew its deicing system was both defective and unsafe before the plane was ever certified by the Federal Aviation Administration. When this damning evidence was found, Cessna agreed to compensate the families of the three men but only after insisting that the families agree to secrecy in order to be fairly compensated. As part of the settlement agreement, Cessna demanded its documents back and these documents were never made public. To this day, Cessna has not addressed the deicing defect in a number of its aircraft, most of which still take flight. The National Transportation Safety Board has reported 6 fatal crashes and 1 serious injury crash since the crash in 2003 that, the attorneys have claimed, involve the same defective deicing mechanism. The most recent Cessna Caravan crash that resulted from the alleged same deicing defect was October 7, 2007 in Washington State. It killed the pilot and 9 passengers.

In May of 1998, Linda Ginzel and Boaz Keysar lost their son Danny when he strangled to death after his Playskool crib collapsed. Linda and Boaz later found out that 3 secret settlements were made in product liability cases involving the same defect in the same crib. Manufacturers Kolcraft and Hasbro fought to make it 4 secret settlements, but fortunately Linda and Boaz were able to successfully deny the request, allowing news of the defective, collapsing crib to be made public.

Manufacturers must not only be held liable for their defective products, but must also be required to make news of these product defects public! These products have caused the death of far too many lives, and who knows how many lives could have been saved had news of product defects been made public sooner. Product liability cases should never be settled secretly, especially when the health and safety of men, women, and children is at stake. If you or a loved one have suffered injury or loss due to a defective product, you need help. The Civil Trial Attorneys at Mininno Law Office are here to help you. Call (856) 833-0600 in New Jersey or (215) 567-2380 in Philadelphia.