In January of this year, Francene Cucinello, New Jersey born host of the Lousiville, Kentucky radio program “The Francene Show,” died of a heart attack and brain aneurysm. She was just 43 years old.
This month, her family has filed a wrongful death claim against the Norton Audobon Hospital. They assert that a misdiagnosis led to Francene’s tragic and untimely death. 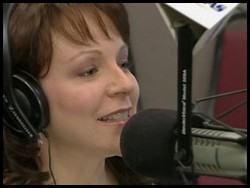 Francene went to the Norton Audobon Hospital emergency room on January 11, 2010 complaining of headache, neck pain, nausea and vomiting, and shortness of breath. She was diagnosed with pneumonia. On January 13th, doctors noticed one of Francene’s pupils were dilated. The results of a CAT scan revealed medical malpractice.
According to a Neurosurgeon, Francene had suffered a brain aneurysm three days prior. She was never suffering from pneumonia, but instead her brain was bleeding. Francene died on January 15, 2010.

The family’s wrongful death lawsuit alleges that the misdiagnosis played a significant role in Francene’s death. Had a CAT scan been ordered and the aneurysm deteced earlier, Norton Audobon Hospital could have saved her life. Norton Audobon maintains that the treatment Francene received at their facility was in line with the standard of care.

Francene was in dire straits when she entered the Norton Audobon hospital on January 11, 2010, and if the standard of care dictates that a CAT scan be peformed based on Francene’s condition and symptoms, than Norton Audobon is undoubtedly guilty of medical malpractice and, in turn, wrongful death.
If you or a loved have suffered due to medical malpractice, or you have lost a loved one to wrongful death, contact the Mininno Law Office for a free case evaluation or call for a free consultation at (856) 833-0600 in New Jersey, or (215) 567-2380 in Philadelphia.

Let the team at the Mininno Law Office earn you the compesation you deserve.