Now that some 96,000 patients could potentially have a defective DePuy ASR hip implant, many patients are asking the question “Did I really need to have hip replacement surgery to begin with?” Many patients who elected to have the DePuy hip replacement surgery did so because they had hip pain and believed that this device would “cure” their pain. But, a hip implant is a treatment for the pain, not a cure.

Why isn’t a Hip Implant a Cure for Hip Joint Pain? 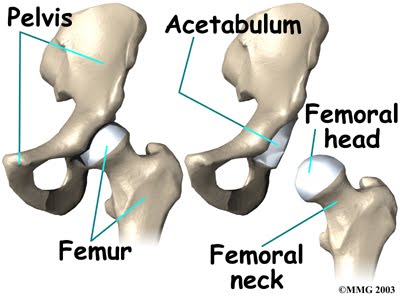 The hip is a joint between the top of the leg bone (“femur“) and the pelvis bone (“acetabulum“). Hip pain is caused when there is damage to this joint. The main function of the hip joint is to support the weight of a body while standing, walking, or running. Damage can occur for a variety of reasons and cause pain, but, there is no “cure” for hip pain.

Hip replacement surgery was devised as one of the many treatment options which could help alleviate some of the pain by replacing, with a hip implant, what were believed to be the painful parts of the hip joint. In theory, a DePuy hip implant, or similar type implant, should provide a metal ball at the top of the femur and a new metal socket in the pelvis which would permit movement like the original hip joint.
The problem for DePuy hip implant manufacturers was attempting to reduce the friction between these hip implant parts which would, in theory, reduce the pain to a patient.

However, in trying to find this cure, doctors and patients may have minimized or downplayed the basic fact that hip implant surgery, in and of itself, is not a permanent cure, and causes significant post-operative pain to a patient.
In addition, because hip implants are not designed to last a lifetime, a patient must endure eventual pain when the hip implant begins to wear down and needs to be replaced.

Where did the DePuy Hip Implant Go Wrong?

The recalled DePuy hip implant was marketed as a new and revolutionary hip implant technology involving the metals chromium and cobalt which were supposed to produce near frictionless movement of the hip joint. No wonder many patients were eager to seek this “cure!”
However, recent studies have shown that DePuy’s ASR chromium on cobalt hip implant system actually causes more wear and tear and will not last as long as a traditional hip implants.

Sadly, what we now know is that although DePuy Orthopeadics and other hip implant manufacturers marketed this product and surgery as safe, effective and a pseudo “cure,” medical research shows that hip implant surgery is never a cure for hip pain. All patients should consider all medical risks and get at least two independent opinions from orthopaedic surgeons.
If many of the 96,000 DePuy ASR hip implant patients that are subject to the DePuy recall had sought this medical advice and realized that hip replacement surgery is NOT a cure, perhaps some of them would have been spared the additional pain and damages which they now will face because of their recalled replacement.

If you have received a DePuy hip implant recall notice and would like more information on your rights and what you may be entitled to, please contact the Mininno law office for a free case evaluation or call for a free consultation at (856) 833-0600 in New Jersey, or (215)567-2380 in Philadelphia.
The team at the Mininno Law Office is experienced with defective product cases and would hard to earn you the compensation from DePuy that you DESERVE.