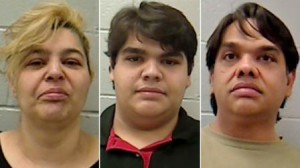 In a disturbing case of elder abuse, an 85-year-old California woman was found abandoned in a cabin in Edgecomb, Maine after being abducted and dragged across the country. Barbara Davis and Nicholas Davis, 41, and their 20-year-old godson, Jonathan Stevens have been charged with the felony of endangering the welfare of an elderly dependent adult. The group allegedly used the woman for her money and then left her when the money ran out. She was found undernourished, disoriented, very thin, and robbed of her entire life savings.

Elderly Woman Dragged Across Country and Abandoned in Cabin

The woman sold her Los Angeles home in 2008 for $600,000 and moved into an apartment where she met the suspects. In 2009 they told her that they wanted to take her on a road trip and one day carried her into a car. They held her captive for more than two years using her for her money. According to Det. Robert McFetridge, who is investigating the case:

“They knowingly left her in a small cabin with no telephone and very little food… They left her to her own devices to take care of herself in 93-degree heat…Every time I talk to her, she slowly comes out of her shell. They exploited her, isolated her from the world, they controlled what she saw, what she heard and who she talked to. This is a textbook case of elder abuse and financial exploitation”

The suspects took advantage of a lonely elderly woman with no family for their own personal gain and left her with nothing. This is an extreme example of how little some people think of the elderly. Once they were done exploiting her for her money, they literally abandoned her to die. The elderly are easy targets for financial elder abuse because they have had their whole lives to save and are often lonely and can be easy to gain their trust. The three suspects were released on bail and are scheduled to appear in court on September 29 to face charges.

If your loved one is currently being taken advantage of financially or physically, or they are a resident of a nursing home and you are worried that the care they are receiving is negligent, abusive, or inadequate, contact the Mininno Law Office for a free case evaluation. You may also call for a free consultation at (856) 833-0600 in New Jersey, or (215) 567-2380 in Philadelphia.