A bill is currently working its way through the Wisconsin Legislature that would limit the admissibility of certain types of evidence in medical malpractice cases. Medical malpractice attorneys believe that this bill, which is part of a larger tort reform plan, may be over reaching. The new law would not allow courts to consider an apology, expression of condolence, or expression of responsibility by nurses, doctors, or other healthcare providers as evidence of malpractice. 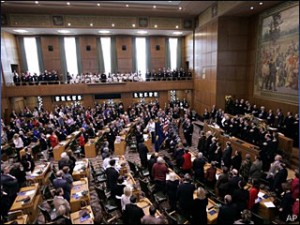 Sandy Pasch originally wrote the bill in an attempt to disallow courts to consider healthcare provider’s apologies, but since the bill became more expanded, she elected to vote against the bill. Pasch, a nurse, was quoted as saying,

“It would negate whistleblowers who call up and say to a family member I’m so sorry your husband died, we’ve been having problems with that equipment and I had to come forward, we cant take another death.”

A vocal leader on the other side of the debate is Mark Grapentine, who is the spokesman for Wisconsin Medical Society, and is in favor of the new bill. Grapenstine said,

“oftentimes a physician will accept responsibility even if he or she has no idea if something was the result of negligence or not. It’s kind of the human part of making someone feel better. We don’t want to have physicians worrying about what words they say and whether they’re being interpreted as an admission of fault or not.”

Medical malpractice attorneys believe that, in some circumstances, the dialogue between healthcare providers and patients could be pertinent and it would be a mistake to broadly outlaw all comments, as this bill attempts to do.