The California Department of Public Health recently announced that the Browning Manor Convalescent Hospital, a nursing home in Delano, California, has received an AA citation – the harshest penalty under California State Law – for nursing home abuse and negligence.
The citation was accompanied by a $100,000 fine from the State for the death of a resident that resulted from inadequate supervision and care. 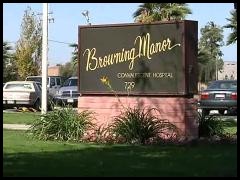 The resident was a 58 year-old man from Kern County. He had a history of aggression and outbursts, and was particularly difficult with staff members on June 23, 2009. Brown Manor Policy states that residents displaying agression should be monitored for at least 72 hours, or until their disposition is relaxed. This monitoring and extra supervision did not happen, however, and a few days later, the 58 year old man fell out of his wheelchair, sustaining injuries to his brain and spine.

He was taken the hospital and release, but died two days later. The Kern County coroner wrote that the man’s cause of death was indeed related to the injuries he suffered on the day of the accident.
Elizabeth Tyler, a representative for the nursing home, claims the man left the facility that day well and coherent. She also announced that Brown Manor has hired an expert neurologist who will testify that the man’s death was not brought on by injuries sustained from the fall.

The New Jersey and Philadelphia nursing home negligence lawyers at the Mininno Law Office are eager and prepared to handle the toughest cases of elder abuse. If you or a loved on have suffered at the hands of a negligent nursing home or long term care facility, contact the Mininno Law Office for a free case evaluation or call for a free consultation at (856) 833-0600 in New Jersey, or (215) 567-2380 in Philadelphia.