In less than three months, three employees of Winterville Retirement Center in Georgia have been arrested. In his investigations, Sgt. Jimmy Fulcher, of the Winterville Police Department, has discovered nursing home abuse and neglect occur at a more alarming rate than he once thought. 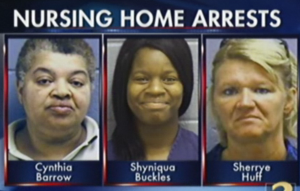 Sherrye Dianne Huff, the former administrator of the home, was arrested in May on five felony charges- three counts of theft and two counts of exploiting an elderly or disabled person- and one misdemeanor charge of theft for stealing from an Alzheimer’s patient. Donna Tower, the elderly man’s niece, said that the man would tell his family that someone was stealing from him but everyone brushed it off because of his Alzheimer’s. They later found out that he was telling the truth and Huff was taking his checks.

Cynthia Ann Barrow, another Winterville Retirement Center employee, was arrested in February for punching an 82-year-old Alzheimer’s patient in the face for taking some butter off the food cart in the dining hall. She then told the police that she only pushed the woman who then slipped and fell. The resident struck her head on the food cart and the floor and was taken to the hospital. She died a few weeks later; officials are still investigating to see if her death was in any way related to the incident. If the Georgia Bureau of Investigation determines the attack caused the elderly woman’s death, Barrow could be charged with homicide.

Another employee stole drugs that were prescribed for a patient who had died and a fourth investigation has begun of possible theft from another Winterville resident. Sgt. Fulcher said:

“Most times when a patient reports something it’s hard to prove it because when they have Alzheimer’s, they will sometimes say something happened to them when it hasn’t happened…in this (assault) case I consider myself extremely lucky as far as getting cooperation.”

The National Center on Elder Abuse estimates that for each documented case of neglect or abuse, five cases go unreported. Nursing home abuse is one of the most under-reported crimes because the abuse victims are often unable to speak out for themselves. It is very important for you to watch out for your elderly loved ones to make sure they are getting the treatment they deserve in the nursing home or long term care facility.

If you have witnessed your loved one or any nursing home resident being abused, or you fear that the care they are receiving may be considered negligent or abusive, you probably have a lot of questions and concerns. Contact the Mininno Law Office for a free case evaluation. You may also call for a free consultation at (856) 833-0600 in New Jersey, or (215) 567-2380 in Philadelphia.