Nursing homes and long-term care facilities are legally obligated to report incidents of nursing home abuse and neglect; however, they often go unreported or covered up. We strongly encourage that if you have a loved one in a nursing home, that you visit often and pay close attention to any warning signs. It is then your responsibility to report these issues for their safety to the facility, the state or a nursing home abuse lawyer. 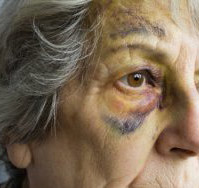 A 70 year old woman who was a resident of the University Place Nursing and Rehabilitation Center in Charlotte, North Carolina was rushed to the Carolinas Medical Center University on the morning of Sunday, August 29, 2011 with a big bruise on her face and a broken pelvis. When the family asked the nursing home what caused the injuries, they told her that the elderly woman had fallen, but emergency room staff at the hospital said that the injuries were not consistent with a fall. This led the family to believe the woman had been assaulted and the police and Department of Social Services, which handles allegations of elder abuse, to investigate what really happened to the woman. The University Place Nursing and Rehabilitation Center only ranked one out of five stars by the state and has had some minor violations in the past. It is too early in the investigation to determine what really happened to the woman, if she fell or was assaulted.

If you have witnessed your loved one or any nursing home resident being abused, or you fear that the care they are receiving may be considered negligent or abusive, you probably have a lot of questions and concerns. Contact the Mininno Law Office for a free case evaluation. You may also call for a free consultation at (856) 833-0600 in New Jersey, or (215) 567-2380 in Philadelphia.