There are many codes and requirements that nursing homes need to meet in order to keep their license to operate. They are monitored by the local department of health in order to regulate the facilities and make sure they are keeping the safety and health of their residents their first priority. As nursing home abuse lawyers , we want to remind you when looking for a facility for yourself or a loved one to research past citations. 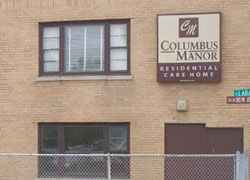 Columbus Manor Residential Care Home has been cited by the Department of Healthcare and Family Services for not complying with 11 federal requirements that nursing homes must obey in order to participate in the Medicare program. Based on inspection surveys in April, July and August, violations were found that involved resident rights, quality of life issues and the physical environment of the facility. In July they found a pool of standing water in the boiler room and laundry room with an extension cord plugged into an outlet and an electric fan going through the puddle. They also found ten pounds of non-dated chicken, ground beef and other food. In August the facility was cited for failing to supervise a resident, who was a registered sex offender with history of sexual aggression, after he left the home without permission and was hit by a car. The resident was admitted to the hospital for a knee fracture. The facility then failed to create a care plan to prevent an incident like this from happening again.

Columbus Manor would have been removed from the federal Medicaid program if the health citations were not rectified by October. But after the August survey, the nursing home submitted their plan for how the violations will be corrected and the health department confirmed that the improvements were made and waived the 11 citations. According to Melaney Arnold, a spokeswoman for the Illinois Department of Public Health, it is not uncommon that deficiencies are waived once the facility has corrected the problems. She said “Sometimes it’s just trying to train the staff of a new policy written – some of those things are easily correctable.” But according to Elce Redmond, an organizer for the South Austin Community Coalition, Columbus Manor has had “massive problems” for the past few years and “it’s a shame residents live the way they do.” It is a shame that it takes the government stepping in and threatening these facilities for them to actually fix such obvious problems.