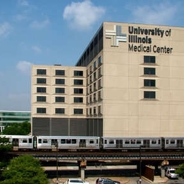 Forty-seven year old George Nissen of Melrose Park, Illinois worked as a Stone Park Police Officer. On February 13, 2005, he responded to a complaint of a disturbance outside a town bar. While trying to dispurse the crowd and restore order to the area, Nissen was thrown over the hood of a car by one of the unruly crowd members. He struck his head on the curb. Nissen was quick to his feet, and none of his fellow officers suspected that any real damage or injury had occurred. A day later, Nissen was rushed to the hospital after having suffered a stroke, seemingly from injuries he sustained after the blow to the head.

Medical Malpractice at the University of Illinois Medical Center

He was admitted to the University of Illinois Medical Center to have an external ventricular drain inserted to drain the excess fluid on Nissen’s brain. The presence of the drain calls for close monitoring of intracranial pressure, which Nissen did not receive. His pressure levels rose to dangerous highs overnight and nurses failed to recognize or alert doctors of the complication, resulting in brain damage.

Today, Nissen is a quadriplegic, and can only communicate through eye or head movements. The University of Illinois has agreed to pay Nissen 16.2 million dollars, and an additional 1.5 million is being paid by an independant nursing agency that employed the negligent nurses.

If you or a loved one are victims of medical malpractice or negligence, please contact the Mininno Law Office for a free case evaluation. Our medical malpractice attorneys are experienced and knowledgable in all areas of medical law, and are prepared to work hard and earn you the compensation you need and deserve. You may also call for a free consultation at 856-833-0600 in New Jersey, or 215-567-2380 in Philadelphia. The Mininno Law Office team is here for you.