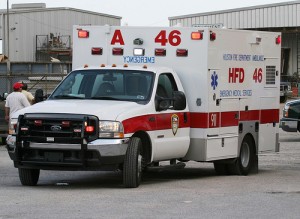 Kelvin Washington, 47, who works as an administrator at a Sugar Land nursing home in Texas, was arrested on August 4, 2011 and is being charged with conspiracy, health care fraud and violations of the anti-kickback statute. He is being accused of creating a plan where he billed federal health care programs for ambulance transport and received payments totaling approximately $20,000 for referring the dialysis patients to a Houston ambulance transport service between 2003 and 2007. He allegedly conspired to have unknowing doctors sign transport prescriptions for patients who were never even admitted to the nursing home. Medicare and Medicaid were billed almost $1 million in false health care claims. The maximum penalties for a violation of the health care fraud statue in Texas is a maximum of 10 years in prison. The maximum sentence for a violation of the conspiracy statue or the anti-kickback statute is five years. Each of the 10 counts charged also carry a maximum $250,000 fine as punishment upon conviction.

If you have witnessed any questionable or abusive behavior in a nursing home, directed towards your loved one or even another resident, contact the Mininno Law Office for a free case evaluation. You may also call for a free consultation at (856) 833-0600 in New Jersey, or (215) 567-2380 in Philadelphia.