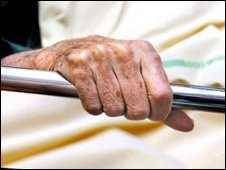 Nursing home neglect are becoming more of a problem in this country as facilities are increasingly understaffed and underfunded. It is important for the staff of these homes to be on top of every patient because quick responses can be the difference between life and death.

Alton Stovall, a 50-year-old man who was living in Edgemoor Hospital, a county run nursing home in Santee, California, died on May 30, 2010 from a bleed after falling from his bed. After falling, Stovall bled for 30 minutes, as other patients pressed their emergency call buttons to get the attention of the nurses. His call button had been tied to the wall, out of his reach. The first call for help was at 3:59 a.m., at 4:24 a.m. another nursing assistant found Stovall drenched in his own blood with his breathing “labored and erratic.” At 4:40 a.m., the nursing assistant found a supervisor who called 911. The EMTs arrived shortly after the patient stopped breathing and pronounced him dead at 5:24 a.m.

Marilyn Tiu and Tess Oli were working at Edgemoor Hospital the night that Stovall died. Tiu was assigned to check on him that night and Oli was assigned to the unit. Neither of the women responded to any of the calls from the other patients that Stovall needed help. Tiu did not show up to check on the patient until after the EMTs had arrived. The ombudsman report stated:

“It appears that Stovall died because of the gross negligence and dereliction of duty on the part of the staff at Edgemoor and that he could have been saved had his emergency call cord not been tied to the wall out of his reach, had (another patient’s) emergency call been answered in a reasonable time, and if the unit had been properly staffed.”

The facility’s administrator Gwenmarie Hilleary, despite state law, did not report the nursing home neglect or the death to the ombudsman’s office. They did not learn of the incident until three days later, from a “distressed employee” who was claiming the hospital was trying to cover up the death. The employee also claimed that several workers felt intimidated by the administrators and were told not to speak with county investigators. According to the ombudsman’s report:

“It became immediately apparent to us at the beginning of our investigation that there were many, large inconsistencies in what Edgemoor’s administrators were telling us and what the staff members, who had first-hand knowledge of the facts and circumstances of Stovall’s death, were telling us.”

The medical examiner performed a short routine examination of Stovall’s body prior to the ombudsman’s office learning of the circumstances of the death. By the time a full autopsy would have been requested, the body had been embalmed making the full autopsy impossible. On March 1 of this year, San Diego County paid a $2 million settlement to Stovall’s family for the nursing home neglect. Tui no longer works for the county, but Oli and the administrator Gwenmarie Hilleary both still work for Edgemoor.