Dehydration and malnutrition are the most common forms of nursing home neglect and abuse. Nursing homes have a legal obligation to make sure that the health of their residents is being taken care of; this includes sustaining proper nutrition and hydration. They are responsible for making sure each resident receives a sufficient amount of nutrients, fluids, calories, protein, vitamins and minerals. If an elderly person becomes dehydrated or malnourished, it can lead to many health problems, including weakened immune system, disorientation, weak muscles, bedsores, and even death.

The elderly are the most vulnerable to dehydration because they may not be able to tell when they are thirsty. In addition, their bodies are no longer able to conserve as much water. Their other health problems also increase the likelihood of becoming dehydrated or malnourished. People with dementia can forget to eat or drink water. Those residents that are physically unable to take care of their own basic needs must rely on the caretakers of nursing homes to do so for them.

Dehydration is an excess loss of body fluids. Signs to look out for are 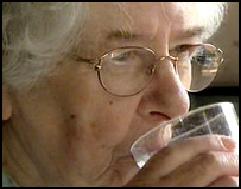 Malnutrition is caused from an unbalanced diet; a lack of the right nutrients or not having enough food in general. Some of the signs that your loved one is malnourished are 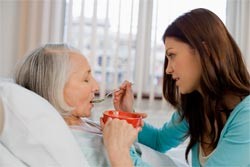 With all of the physical complications present in the elderly, dehydration and malnutrition are often overlooked or attributed to other causes. In order to avoid this form of nursing home neglect caretakers need to know the signs and constantly be looking out for them in each patient. They need to know each patient’s individual needs, their physical limitations, health issues and medications so they can make the required adjustments to avoid dehydration and malnutrition.

If your loved one is currently a resident at a nursing home and you believe they may not be getting the proper hydration or nutrition, contact the Mininno Law Office for a free case evaluation. You may also call with any questions for a free consultation at (856) 833-0600 in New Jersey, or (215) 567-2380 in Philadelphia. 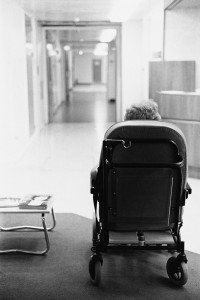 A woman in West Virginia has filed a lawsuit against the nursing home that she believed killed her family member via nursing home neglect. The suit was filed by Angela Black of West Virgina against HCR Manorcare in Kanawha Circuit Court. The wrongful death suit claims that Rose died after receiving poor care which led to malnutrition, dehydration, untreated bedsores, and infection. While there, Rose suffered mental and physical trauma, and ultimately, death.

Manorcare is a huge network of nursing homes with over 500 facilities in 32 states. The Mininno Law Office has blogged on the poor conditions and negligent care of Manor Care facilities in New Jersey for the past year. Manor Care employs about 60,000 workers nationwide and has been cited for many deficiencies, ranging from small, facility-related violations, to larger, more dangerous, care-related violations.

Arcel Rose and his loved ones depended on HCR Manor Care to provide adequate, supportive, and attentive care in order to carry on the remainder of his life with as much comfort as possible. Instead, nursing home negligence and abuse took Rose’s life.

Malnutrition, dehydration, and bedsores/pressure ulcers are sure signs that neglect is taking place, and are totally unacceptable in a nursing home facility.

If your loved one is currently a resident at a nursing home and you fear that the care they are receiving may be considered negligent or abusive, you probably have a lot of questions and concerns regarding your loved one’s future. Contact the Mininno Law Office for a free case evaluation. You may also call for a free consultation at (856) 833-0600 in New Jersey, or (215) 567-2380 in Philadelphia.

A Kentucky jury awarded $42.75 million to a family who claimed that nursing home abuse and neglect led to their loved one’s death. Joseph Clint Offutt was a resident at the Harborside of Madisonville nursing home for only nine days before he died. In that brief time, Mr. Offutt became lethally dehydrated, despite having a feeding tube. The nursing home failed him in the most basic way: they failed to ensure he had enough water to live.

Mr. Offutt served in World War II and was still planting crops at age 88. A stroke weakened him in 2007. His wife of 58 years, Pearline, cared for him at home for eight months. Despite Pearline’s efforts, Offutt’s family concluded he needed professional care. Nursing homes exist for the purpose of caring for those whose families can no longer care for them.

Of course, the nursing home then had the audacity to criticize the jurors. Carol Britt, administrator of the facility, released the following statement:

We feel the size of the verdict is outrageous and totally inappropriate based on the facts presented in the case. Not only did we provide quality care to this individual, but the outsized punitive damages assessed against us bear no relation to our conduct. We intend to vigorously challenge the decision through the appeal process.

With all due respect Ms. Britt, how does outstanding care lead to death by dehydration in just nine days?

Adult Protective Services officials of the Kentucky Cabinet for Health and Family Services investigated the care provided to Mr. Offutt and agreed with the allegations of nursing home abuse. The Office of Inspector General cited the nursing home for failing to prevent bedsores in the case of Mr. Offutt. Was the state wrong too Ms. Britt?

As a New Jersey and Philadelphia nursing home abuse lawyer, I find Ms. Britt’s comments to be indicative of the attitudes expressed by the entire nursing home industry. The jury awarded $1 million for Offutt’s pain and suffering, $1.75 million for his wife’s loss and $40 million for punitive damages. The jurors were members of Ms. Britt’s community. The jury took time out of their lives to sit through the trial and listen to all of the evidence. Contrary to Ms. Britt’s opinion about the jury and the size of their award, the evidence against the nursing home must have been so egregious for the jury to become so outraged that they felt the need to send a message to the nursing home that their conduct was reprehensible.

If you or a loved one have suffered due to nursing home abuse or neglect, please contact the Mininno Law Office for a free case evaluation or call for a free consultation at (856) 833-0600 in New Jersey, or (215) 567-2380 in Philadelphia.
Our team is dedicated to fighting this huge industry that seemingly has no respect for the lives with which it is entrusted. Let us earn you the compensation you deserve.

A Nursing Home is a Business 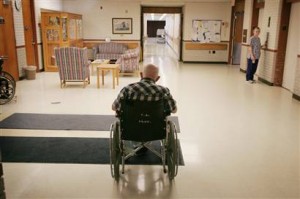 We’ve talked before about how nursing homes are businesses; big businesses with corporate agendas and money hungry CEO’s. Today, these corporations are wide-eyed at the thought of an influx of baby boomers entering their facilities. This prospect of large profits has caused a major drop in the level of care provided to our elderly loved ones.

Approximately 1.5 million Americans are currently enrolled in a nursing home or long term care facility program. Unfortunately, a number of these residents will suffer, or already have suffered, from nursing home abuse and negligence.
Bedsores, chemical restraints, dehydration, malnourishment, physical and verbal abuse, co-resident violence, fraud, medical errors, and unsafe facility conditions, are all potential threats to your loved one’s health and well-being while a resident at a nursing home.

Regulatory and legislative bodies have passed many laws protecting the rights of senior citizens, but it seems that our judicial system is the only system uncovering the many events of abuse and neglect. Without nursing home abuse attorneys, too many instances of subpar care would go untold, especially since nursing homes are sticking mandatory arbitration agreements in their huge packets of admission documents and failing to explain that those agreements remove resident rights to a jury trial.
American Association for Justice President, Gibson Vance, comments:

“Corporate nursing homes and insurance companies have continually chosen to put profits ahead of the well-being of our most vulnerable population. Where regulatory and legislative bodies have been unable to cope with this distressing rise of neglect and abuse of our elderly, the civil justice system has stepped into the breach.”

Let the team at the Mininno Law Office earn you the compensation you deserve. 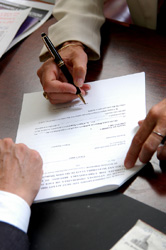 Congress is considering the Fairness in Nursing Home Arbitration Act of 2009, which would invalidate mandatory arbitration agreements in nursing homes. This is an important law that needs to be passed in order to advance in the fight against nursing home abuse.

How does this happen?

You can’t provide the care and support your loved one needs, and you arrive at the realization you must place them in a nursing home. The reason may be for long term care, although hopefully it is for rehabilitation with the goal of sending them back home. You choose a nursing home to place your loved one. When signing the package of numerous documents presented to you during the admission process (picture all of the documents you signed when you bought your first house being presented to you one after the other), you will eventually be presented with a mandatory arbitration agreement. Unfortunately, few people understand what they are signing, or why they are signing it.

Many nursing home admissions are directly from a hospital, and occur after a medical emergency such as a stroke or broken hip. Families often have no choice but to accept the first available nursing home with an available bed. When families unknowingly sign away their right to sue the nursing home, they believe they will get the good care they are promised. The last thing on their mind is that the nursing homes will injure their loved one by allowing pressure sores that lead to infections and amputation of limbs; suffocation on bedrails and other restraining devices; serious fractures from preventable falls; physical and sexual assault; renal failure from dehydration; malnutrition; medication errors; and death from fires in unsafe buildings.

Now that you know what a mandatory arbitration agreement is, and what it means to the family of an abused nursing home resident, ask yourself if that is fair. What does it say to you about an industry that promises good care and at the same time asks you to sign a mandatory arbitration agreement that protects them from being held accountable for bad care? Nursing homes know that if a court upholds a mandatory arbitration agreement, a jury with the power to punish the nursing home for often deplorable conduct will never have a chance to hurt their nursing home in the only place that matters to them – the pocketbook.
The Fairness in Nursing Home Arbitration Act would end the practice of making families agree to give up the right to a jury trial in order to get their loved one accepted by a nursing home. Congress should send a message to the industry that injuring residents is not simply a cost of doing business. Compassion should be enough of a reason for a nursing home to provide the good care they promise. Since the industry has proven time and a gain that they will not do this voluntarily, Congress must keep open the only avenue that does hold them accountable – a jury who can listens to the evidence and judge their conduct.

If you or a loved one have suffered the effects of nursing negligence or abuse, call an experienced New Jersey or Pennsylvania Nursing Home Abuse attorney at the Mininno Law Office. We will work hard to get you to compensation you deserve!
Contact the Mininno Law Office for a free case evaluation or call for a free consultation at (856) 833-0600 in New Jersey, or (215) 567-2380 in Philadelphia.